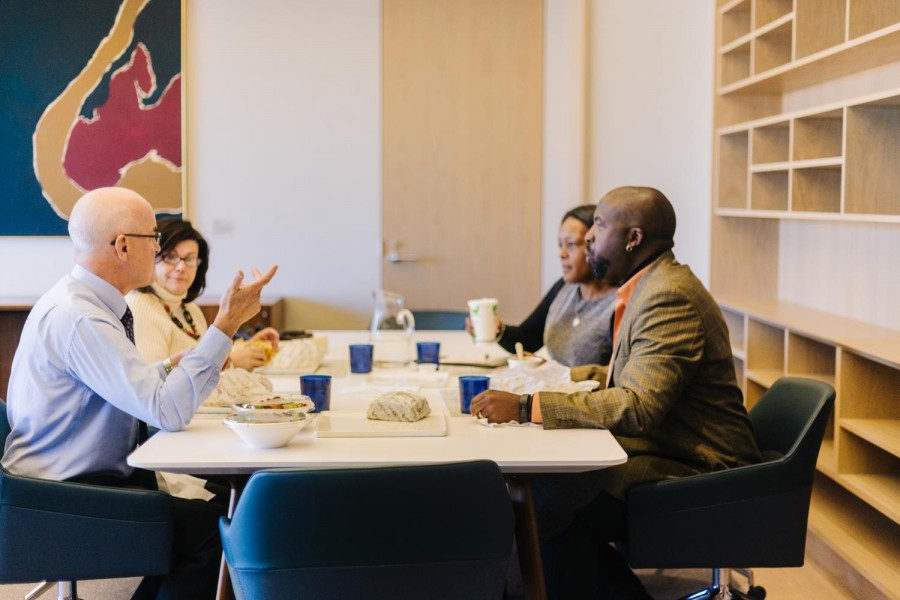 Charlton McIlwain, associate professor of MCC in the Steinhardt School and Task-Force co-chair, talks to Andrew Hamilton about the Ad Hoc task force. (via facebook.com)

In response to students’ complaints about NYU’s capability to deal with racially-charged issues, the University Senate established the Diversity and Inclusion Advisory Task Force to alleviate racial disparity on campus and encourage a culture of inclusion for the entire community.

The task force, which consists of 32 members from students, faculty and administration is aimed to review and assess the status of diversity and inclusion at NYU and to recommend subsequent improvements.

There are four committees on the task force, each of which includes a student representative. Three of the committees will focus on gathering data on the racial and ethnic demographics of the student body, faculty and administration. The other will work on assessment.

The task force’s first meeting proved to be emotionally challenging to CAS sophomore Juan Calero, a member and student activist on campus.

“At the start of the meeting we weren’t getting the same feeling from the administrative team,” Calero said. “I got very frustrated at one point [and said], ‘Do you have any idea how important this is?’ Then the atmosphere changed and the administrative team and faculty understood where exactly the students on the task force are coming from.”

Task Force co-chair and Associate Professor at the Steinhardt School of Culture, Education and Human Development Charlton McIlwain listed three key ways to ensure the longevity of the task force task by including groups across campus, connecting people between departments and campuses and invoking structural changes within the administration.

“Ultimately our task is to determine what our goals should be as an institution with respect to diversity, inclusion and equity, and make recommendations about how to best move forward and achieve these goals,” McIlwain said.

On April 28, the task force will present its first report to the University Senate. McIlwain said the first report would including its data on campus demographics and a complete inventory on the status of diversity at NYU.

LS freshman Tykwaan Rivers, who is also the president of Brittany Hall council, thought of the task force as the frontline of students’ efforts to diversify the campus.
“The task force is the foot in the door for us and the mouthpiece for all the concerns we’re trying to address,” Rivers said.