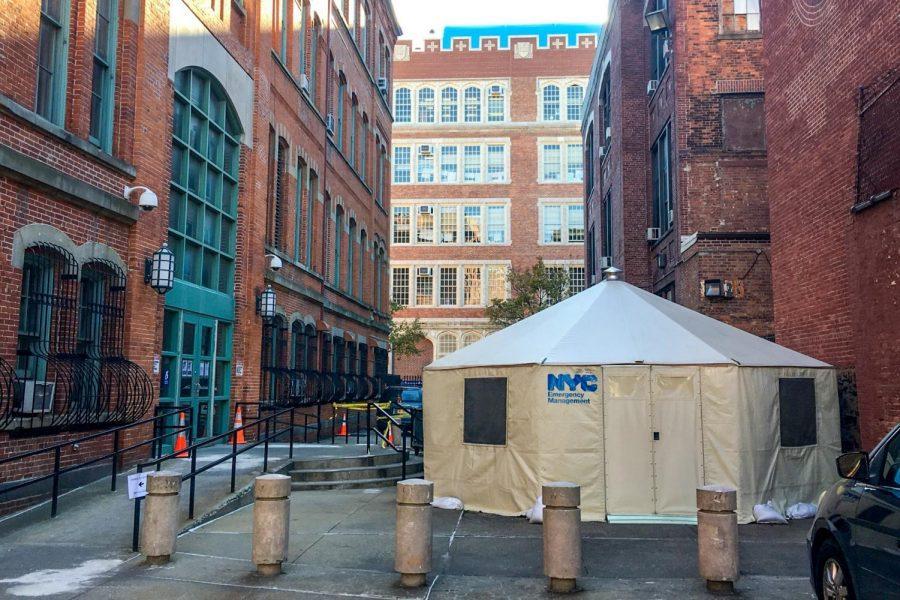 NYU’s Hurricane Maria Assistance Program has increased their numbers of students who were affected by the national disaster that occurred on Sept. 16 - Oct. 3.

A towering mango tree once stood triumphantly outside of Christian De La Cruz’s grandmother’s house in Santa Isabel, Puerto Rico. The 26-year-old said the tree, which had become a hallmark in the area for its juicy fruit offerings and timeless beauty, had remained a constant companion to the home well before his own birth.

In a phone interview, De La Cruz recounted hearing news channels warn of an impending Category 5 hurricane expected to pass directly over the island. The eye of the storm had its sights set on Carolina, De La Cruz’s hometown. He and his sibling hastily packed their bags and made the drive south. When they arrived they hunkered down in his grandparents house. For De La Cruz the evening was surreal, but he says he could see the fear painted on his grandparents’ faces.

When De La Cruz emerged from his bombarded home the following day, he remembers a scene of complete devastation. Trees and power lines littered the ground; all outside communication had ceased, and the streets had been replaced by rivers. Christian described the scene like that of a nuclear wasteland. And lying there beside the house, was the age old mango tree, snapped in half like a chopstick.

De La Cruz, like many college students in Puerto Rico, had his hopes of finishing college abruptly uprooted. However, he, along with an estimated other estimated 55 to 58 students, will have the opportunity to finish the semester, tuition free, at NYU as part of the Hurricane Maria Assistance Program. The university first announced the program in November 2017 but has recently increased its admitted students from 50 to 63 due to the large number of applicants, said Assistant Vice Chancellor Josh Taylor in an email. According to Taylor, NYU received 400 applications for the program.

The program provides students with a full paid tuition of 12 to 18 credits, an NYU meal plan, housing in one of NYU’s residence halls and free access to NYU’s health insurance program. Only undergraduates who were already enrolled in undergraduate universities in Puerto Rico and in good academic standing were considered for the program. Those who applied would fall under a special tuition program and would be considered a Visiting Undergraduate Student, according to Fortune. Visiting Undergraduate single semester tuition is valued by NYU at $25,322. Additionally, students are required to pay the expected tuition of their Puerto Rican university, as NYU specifies on its website.

“In an effort to ensure that this program does not negatively affect schools in Puerto Rico, students will be expected to pay their regular spring tuition to their home campus.”

De La Cruz is just one of an estimated 114,000 to 213,000 Puerto Rican residents who are expected to exodus the U.S. territory by 2019, according to the Center for Puerto Rican Studies at Hunter College.  These numbers may not decline any time soon. Hurricane Maria’s initial aftermath claimed 64 lives and left 95 percent of the island without electricity. However, nearly four months hence, much of the island remains without electricity.

Ana Garcia, one of the 63 Puerto Rican students accepted into NYU’s assistance program, said her home is amongst those still without electricity. In the wake of Maria’s destruction, Garcia said she was forced to read textbooks and finish assignments in complete darkness, with only a handheld flashlight to light her way. Even her university, the University of Puerto Rico, struggled to maintain constant power.

De La Cruz blames the slow recovery on what he sees as widespread political and business corruption throughout Puerto Rico. The psychology and film student was also skeptical of the government’s report that 64 people died. He suggested that based off of what he had seen on the ground that the number of dead must have been larger.

“Politics in Puerto Rico does not represent the people,” De La Cruz said.

When asked why she thought the recovery process had moved so slowly, Garcia attributed several factors but said above all, people did not expect the severity of the storm. “Nobody was expecting how chaotic it would be,” Garcia said.

Inconsistent electricity and a slow recovery have left some to seek new beginnings away from home. Not long after the hurricane made landfall, New York City opened a Hurricane Service Center aimed at assisting all hurricane victims but with an emphasis on displaced people from Puerto Rico. The service center attempts to get displaced victims back on their feet by offering health services, providing Supplemental Nutrition Assistance Program benefits for food and transitioning children into New York public schools. According to Elizabeth Angeles, a project manager for New York City’s Emergency Management Center, over 1,400 visitors have received aid from the service center.

Outside of New York, other major universities, including Brown University, Cornell University and Tulane University have offered their own assistance programs for Hurricane Maria victims. Brown reportedly will not charge accepted Maria students tuition and is also aiding in travel expenses. Jeff Schiffman, director of Admissions at Tulane, told WSN that Tulane felt a moral responsibility to aid hurricane victims. Tulane faced it own natural disaster with Hurricane Katrina, 13 years ago, which forced its students to complete courses and attend classes at universities around the country. According to Schiffman, NYU allowed some Tulane students to attend classes at the Washington Square Campus during this time.

For De La Cruz and Garcia, the Hurricane Assistance Program offers a glimpse of relief after months of anxiety. De La Cruz said that he had applied to NYU after graduating high school but had been denied twice. When he heard that NYU was offering a hurricane assistance program, De La Cruz  was still without electricity. Similarly, Garcia said she heard about NYU’s program while sitting at a bakery, trying to charge her phone and laptop. Both De La Cruz and Garcia will begin their first day of classes today.

A version of this article appeared in the Monday, Jan. 22 print edition.