The Haunting Inception of ‘Not Clown’ 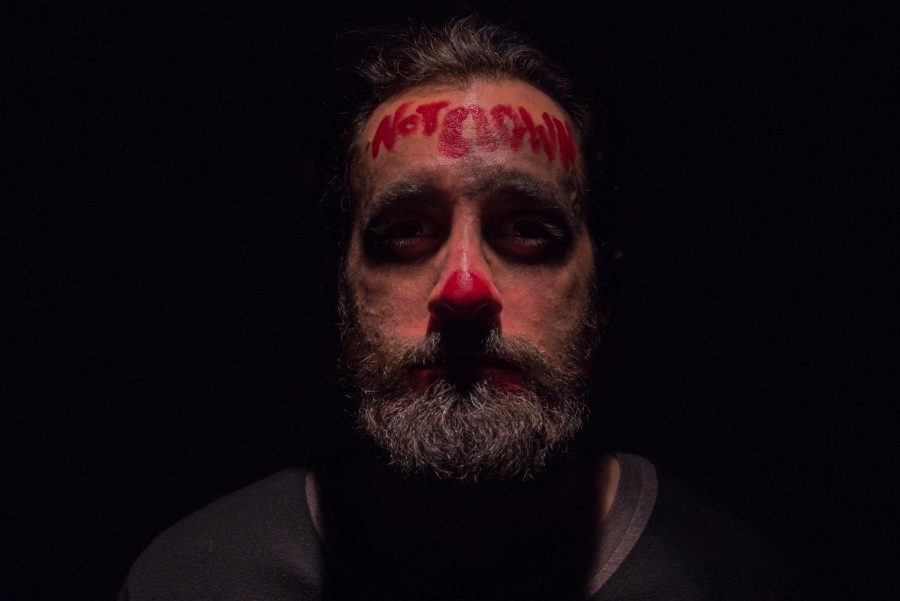 An actor from “Not Clown” by the Pigeonholed Theater Company. The show ran last weekend at the Robert Moss Theater in SoHo.

The show, which combines the slapstick antics of a clown with the conflicts of a dystopian world fraught with persecution, challenges all perceptions of normalcy with its zany storyline while providing a unique experience for its audience members.

Written by Steve Moore and Carlos Treviño of Physical Plant Theater, “Not Clown” is a show within a show. Years after escaping violent persecution in the United States, a troupe of clowns returns from their refuge in Latvia to visit a young girl named Linda, who writes and produces a play about the bitter world she and her old friends once inhabited.

Linda’s show chronicles her meeting of the clown troupe, her uneasiness as a bystander witnessing its arbitrary persecution and torture by the government and her eventual desire to escape with the troupe to freedom. Despite the fact that her father was a violent clown oppressor himself, Linda wanted to flee to Latvia alongside the former circus performers. However, she was ultimately too afraid to leave.

The conflict in her show’s production arises from the fact that the clowns are playing themselves. The performers’ reenactment of their own violent persecution and torture is incredibly traumatic for them, even years after the fact. In an especially tense moment, one of the clowns walks out of Linda’s production, and Linda and the rest of the clowns scramble to continue their performance without him.

With the clowns playing both themselves and their persecutors, tension builds. The clowns ultimately toss aside Linda’s script, tie her to a chair and dance around her gleefully. In an act of revenge for never truly standing up for them, they rebel, and “Not Clown” concludes.

The show’s strange cessation left audience members in the Robert Moss Theater confused about whether or not to gather their things and leave the theater.

Directed by Daniel Adams, a second-year MFA candidate at Columbia University, Pigeonholed’s production of “Not Clown” was executed artfully. Theater company co-founder Sasha Lazare portrayed Linda as irritatingly eager. Linda’s naivety in assuming that her adult friends would be willing to emulate a torturous time in their lives for the sake of her playwriting pursuit was characterized well. Lazare depicted Linda as clearly unaware of her privilege and of the fact that she and the clowns’ adventures resulted in her ultimate cowardliness.

Linda’s anxiety — that of a small girl grappling with large societal issues — felt frighteningly familiar. She knows what is the right thing for her to do, but she is also aware that in an oppressive world, doing the right thing requires enormous bravery.

“Not Clown” provided an exceptional framework for showcasing the duality of the other eight actors’ talents. At the start of Linda’s show, the persecuted artists’ former clown selves are showcased. This production’s actors nailed the physical comedy and immature tomfoolery required of that portion. For the rest of the show, the same actors masterfully depicted a group of people experiencing intense trauma as they relive losing their friends to a violent and oppressive state.

Pigeonholed Theater Company’s production of “Not Clown” presented a combination of high jinks and hardship that encouraged reflection in its audience members. It achieved the difficult task of inspiring laughs and also triggering the uneasiness typically felt with a dystopian piece.

A version of this article appeared in the Jan. 29 print edition. Email Emily Fagel at [email protected]