The Politics of Joy in ‘RIOT’ 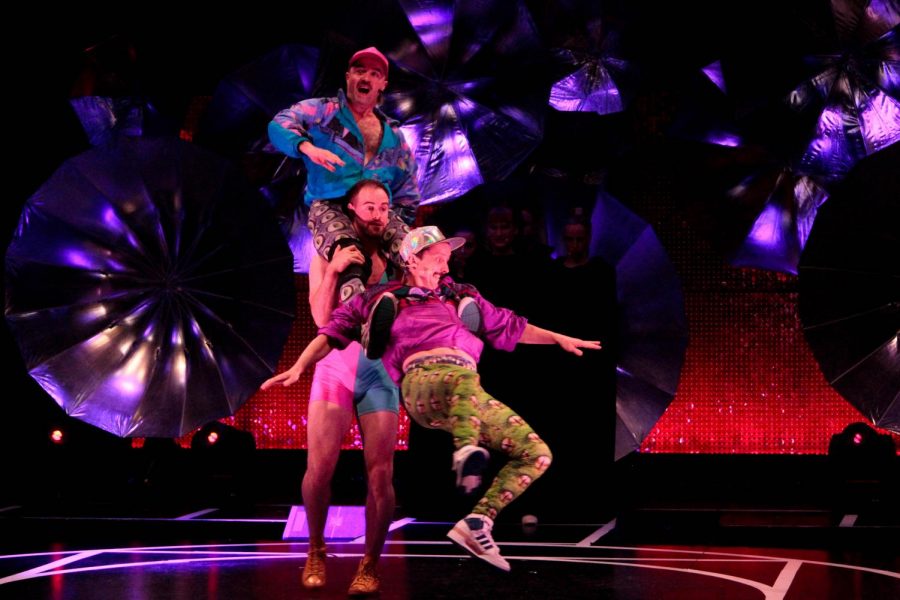 “RIOT,” Irish theater collective THISISPOPBABY’s multi-genre theater piece, is 100 minutes of spectacle –– both joyful and political –– as it pivots between deadly serious and ridiculously fun.

Co-presented by NYU Skirball and the Irish Arts Center, THISISPOPBABY performed the piece at the Skirball Center for the Performing Arts last Thursday, Friday and Saturday. Winner of Best Production at the 2016 Dublin Fringe Festival, the performance combines spoken word, dance, singing, comedy, drag and audience participation into something completely unique.

“RIOT” is comprised of about 20 separate vignettes, each varying wildly in tone, style, form and content, dictated largely by the particular performers. There’s the meld of powerfully political spoken-word and rap performed by Emmet Kirwan, the unruly drag queen emcee Panti, the acrobatics and extended striptease of Ronan Brady –– a crowd favorite –– and a quad of singers serving as something like a Celtic-Greek chorus for the evening.

The show’s mixture of pure fun and its deeper meditations on the world’s present troubles can sometimes be a bit jarring. The riotous comedy and dance twosome, Lords of Strut, perform in character as two overconfident brothers in ’80s attire. The show also features Up and Over It’s, an Irish dance duo, lively routine set to Britney Spears’ “Work B**ch.” All these elements combined make for strange bedfellows to Kirwan’s piece about a young woman facing down the hardships of teen motherhood in Ireland Somehow, “RIOT” makes it all work.

Some of the most compelling pieces in “RIOT” involve breaking the stage’s fourth wall, whether it’s Panti interacting playfully with members of the audience or when select spectators are commanded to beat a Jesus in a cling-wrap diaper with pool noodles –– this ended up being the most uproarious part of the evening.

While never quite gelling, the show’s distinct sensibility comes closest in Panti’s final piece. Starting as a straight-ahead comedy routine about the adults in her life trying to smash her childhood dream of becoming Farrah Fawcett, Panti skillfully synthesizes her monologue into something like a thesis statement for the night. Deeply sincere but never cloying, she entreats the audience.

In a fortuitous technical malfunction during a solo number by singer Megan Riordan near the end of the show, the lights and music suddenly went dead. Her mic still hot and barely missing a beat, Riordan stalled skillfully. Suggesting the audience illuminate the stage with their phone flashlights, she mused on collaboration, artistic or otherwise. She urged the audience to look upon one another for assistance.

“Our great mistake is to act the drama as if we were alone,” Riordan said. “The only thing we can do in times of darkness is to look for the light in others.” She concluded with something like a toast to the audience. Daring them to repeat her, she declared: “To living in the light!”

A version of this article appeared in the Tuesday, Feb. 20 print edition. Email Alex Cullina at [email protected].