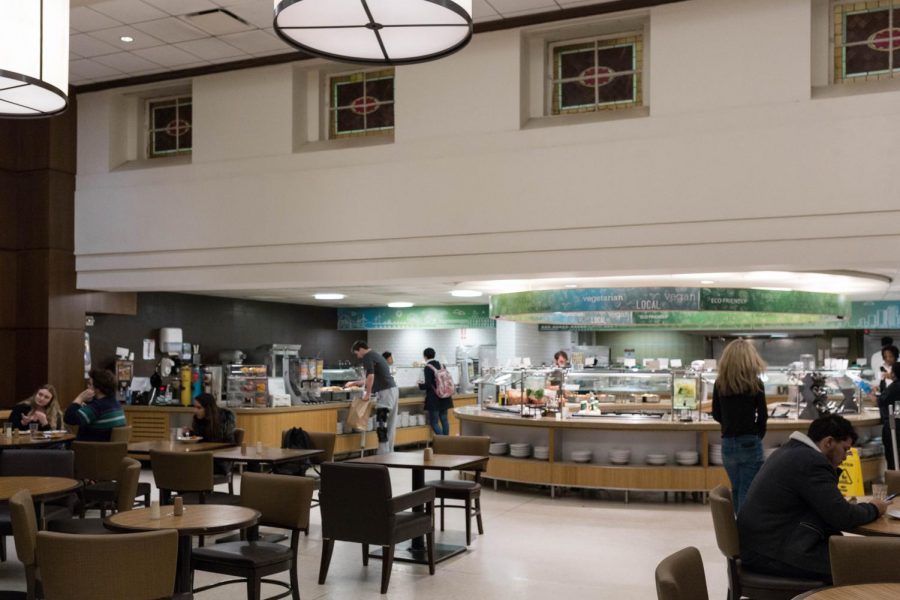 This is the second Aramark controversy resulting in employee dismissals this academic year, the first of which followed Lipton Dining Hall’s New York City Department of Health low-graded inspection, in which rat droppings were found in the facilities.

This meal was served only a week after a similar menu of fried chicken and grape Kool-Aid was served at Loyola University. The incidents at NYU and Loyola are only the most recent instances of mismanagement for Aramark.

Karen Cutler, vice president of communications at Aramark, emphasized in a statement to WSN that one of the company’s core values is quality support for its numerous consumers.

“We operate our business with social responsibility,” Cutler said in the statement. “We focus on initiatives that support our diverse workforce, advance consumer health and wellness, protect our environment and strengthen our communities.”

Aramark also supplies food to private prisons. Beginning in 2014, there have been a myriad of reports claiming that Aramark’s sanitary and health practices are detrimental to the well-being of prisoners.

In 2014, inmates found maggots while peeling potatoes at the Charles Egeler Reception & Guidance Center in Jackson, MI. About 30 prisoners fell ill from food poisoning at another Jackson facility supplied by Aramark. A former Aramark employee reported unsanitary kitchen practices such as serving raw or undercooked meat, falsifying records about dishwater temperatures and quality of cleaning solutions and inflating the count of meals served to inmates. This complaint was supposedly one of the reasons the employee was fired.

In September 2014, inspections of Aramark’s meal service for seven prisons in the Ohio area received contract compliance scores of less than the minimum level of 80 percent.

In 2015, the Michigan Department of Corrections confirmed that Aramark served food that had been thrown in the trash to prisoners in Saginaw County. Before this, Aramark employees instructed kitchen staff at the Central Michigan Correctional Facility to serve rat-bitten cakes covered with icing.

More maggots were found at the G. Robert Cotton Correctional Facility in Michigan. The culmination of these grievances caused the state of Michigan to end its three-year deal with Aramark 18 months early.

Aramark’s issues aren’t limited to health and sanitation. There have been reports of Aramark employees smuggling marijuana into Michigan prisons and attempting to hire inmates to assault other inmates and a multitude of inappropriate relationships between staff and prisoners.

Cutler claimed that much of this information is untrue.

“There is a lot of misinformation and propaganda around Aramark and our service of food to the Corrections industry, as a result of a Netflix documentary [“13th”] and ongoing activism around the prison industrial complex and anti-privatization,” she said.

She also denied the existence of any infestations in Ohio or Michigan.

“There are many unfounded allegations about the quantity and quality of food for inmates, service levels and sanitation issues,” Cutler said. “The most disturbing and damaging of these baseless claims involved ‘maggots.’ There was not and has never been an infestation of any kind in food served to offenders in Ohio or Michigan [Department of Corrections] facilities.”

Even so, these allegations prompted a direct response from NYU last spring, when NYU Prison Divest started a petition urging NYU to divest from Aramark. Joseph Taecker-Wyss, a Gallatin junior and a member of the Incarceration for Education Coalition, outlined a few of the reasons why they started the petition. The IEC is a group of NYU community members working to end discrimination against formerly incarcerated NYU applicants and applicants with criminal records.

“Aramark is one of the biggest profiteers from mass incarceration,” Taecker-Wyss said. “Fundamentally, it’s an unjust company. It has had a huge range of human rights abuses, and it’s directly tied within the system. With NYU supporting it, it’s supporting the practices of Aramark and mass incarceration.”

Prison Divest’s petition, which gained 391 signatures in the past year, was brought to the administration in the spring of 2017. According to the IEC, the university rushed them through its offices quickly and said it would consider the petition when renewing the contract with Aramark in August of this year.

“NYU’s primary tactic when dealing with on-campus student organizations is to just deflect, to claim they’re unaware or to claim it’s somehow outside of their control,” Taecker-Wyss said. “Obviously NYU does choose what they’re invested in, what organizations they support, and it’s an intentional choice to support Aramark.”

Aramark has also recently faced backlash internationally, stemming from its ties to Direct Provision, an institution that houses asylum-seekers and their children while they await relocation. Direct Provision has been widely criticized because it denies residents the right to work, study or cook their own meals. While it is supposed to house asylum-seekers temporarily, many families end up spending seven to 10 years in it.

Colleges across Ireland have started to protest Aramark, including the Union of Students in Ireland, Trinity College Dublin Students Union and University College Dublin. Alex Greene, a 2017 alumna and a member of the IEC, said that she wasn’t surprised that Aramark has ties with Direct Provision. She emphasized that it was all the more reason for NYU to take accountability.

“NYU should hold themselves to the standard that they claim to have, which is that they’re diverse, inclusive and non discriminatory,” Greene said in an interview with WSN. “Yet they continue to use and invest in companies that use prison labor and utilize unethical practices.”

The main motive for NYU’s continued partnership with Aramark, according to Greene, is that the university’s administration finds it too hard and financially taxing to secure a new food provider.

“They have the financial incentive to do nothing,” Greene said. “They don’t have to put in the time and money to find a new company or figure out new ways to provide dining services to a large university. One of their largest pushbacks was that they didn’t want to go through all of that to find a new company, but I mean, that’s their job.”

When questioned about whether NYU was considering divestment from Aramark when their five-year contract ends this summer, NYU spokesperson Matt Nagel referenced a message sent to NYU’s Resident Assistant Council and Inter-Residence Hall Council this month from Owen Moore, the assistant vice president for the Division of Campus Services.

“The university has begun planning for a RFP [request for proposal] process for food service providers,” the email stated. “I want to initiate consultation with the I.R.H.C and RA council at the next Dining Advisory Board meeting ​​on March 21​ (which is open to all students), as we will be reaching out soon to the university community for input.”

The IEC will be organizing a protest against Aramark this Thursday, Feb. 29, in Downstein.

A version of this article appeared in the Monday, Feb. 26 print edition. Email Kristina Hayhurst at [email protected]