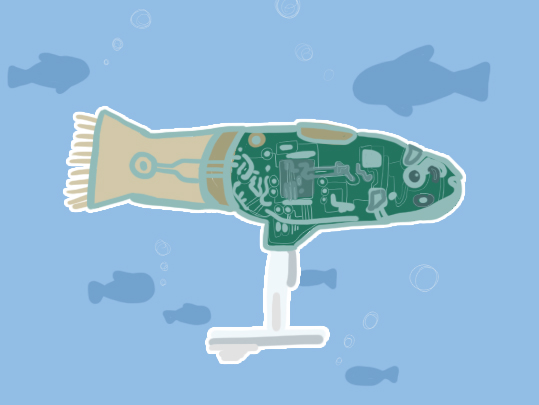 Researchers at the Tandon School of Engineering are leading the way in true-to-life robotics with the creation of a model zebrafish that can mirror the behaviors of a living one.

The similar social complexities of zebrafish and humans is the subject of professor of Mechanical and Aerospace Engineering Maurizio Porfiri’s lab at Tandon, where he and a small team of post-doctoral biologists, engineers and psychologists are studying zebrafish, using a robot capable of tracking a live zebrafish and mimicking its movements.

Beyond studying the behavioral patterns of zebrafish, the experiments that Porfiri’s lab has done fall under what is known as ethorobotics, which he describes as the intersection of animal behavior and robotics.

While replicating the movements of a fish may seem like a simple task, Porfiri described the process as intense.

The robot consists of several parts, such as a real-time 3-D tracking system that can follow a zebrafish and a platform that can move to replicate the fish’s motions, both of which were a challenge to build, according to Porfiri.

“We undertook these efforts separately and then merged through several iterations,” Porfiri said.

Because the replica can react directly to a real zebrafish, the simulation creates a closed-loop system in which the real fish sends information to the replica and the replica reacts in a continuous back and forth, like two people talking, Porfiri said.

According to lab manager Tommaso Ruberto, a biologist and co-author of the study, this technological advancement is able to be replicated while still allowing room for customization.

“The cool thing is that their development, their nervous system development is basically identical to ours,” Ruberto said. “So when they are larvae, their brain develops just like ours. Other things that make us quite similar to fish are for example, the addiction to drugs or for example, if you give them alcohol, they will behave similarly to us.”

That’s right, zebrafish can get drunk.

“If you, of course, get them intoxicated with alcohol, they will behave just like an intoxicated person,” Ruberto said. “They will stumble and they will swim very wobbly, so this is our example of how zebrafish are similar to us.

The robot zebrafish can replicate this behavior, as well. However, biomimicry isn’t limited to zebrafish.

The application of this real-time reaction technology has started taking place in other capacities such as squirrels, rats and birds according to Ruberto. In the future, robots might even simulate human presence.

“Yeah, of course why not?” he said. “The possibilities are basically infinite.”

A version of this article appeared in the Monday, March 19 print edition. Email Paul Kim at [email protected]