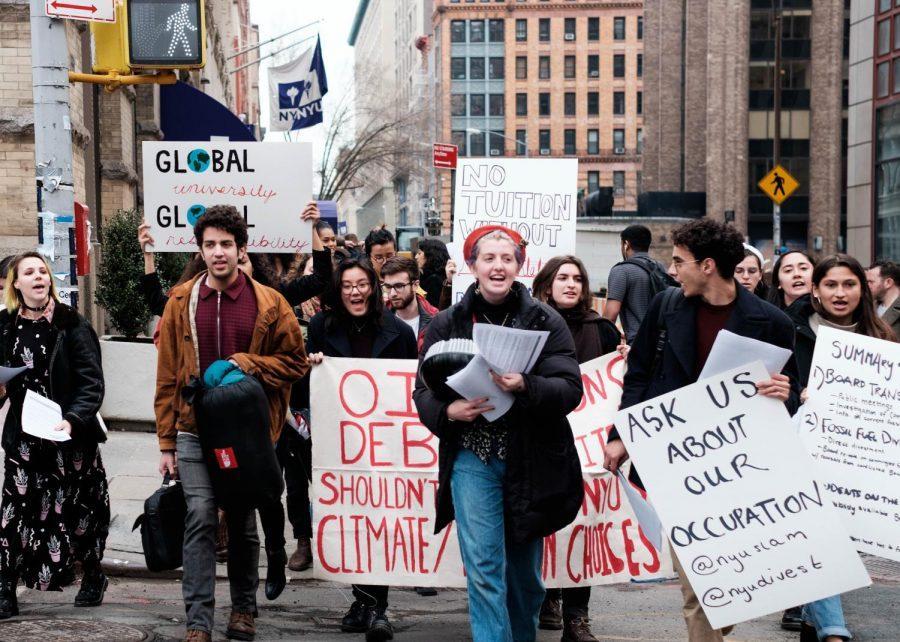 Demonstrators marching from the Admissions Center to the Kimmel Center for University Life yesterday, chanting and handing out flyers outlining their demands to passersby.

At 10:30 a.m., the University Senate passed three resolutions, two of which would add student and faculty representation to the Board of Trustees, according to the Student Labor Action Movement and representatives of Student Government.

The resolutions will now head to the Board of Trustees for final approval.

The University Senate passed resolutions by the Student Senators Council and the Tenured/Tenure Track Faculty Senators Council that demanded student and faculty representation on the board of trustees, as well as increased communications between the Board of Trustees and the NYU community, according to Student Body President Juan Calero.

The University Senate also passed a resolution by the Full-Time Continuing Contract Faculty Senators Council that demanded increased communications between the board and the NYU community.

SLAM has advocated for this resolution repeatedly throughout the past two academic years with rallies and protests. Activists feel that student and faculty representation on the board is essential in increasing the transparency of university decision making and representing the interests of community members.

“The passing of these three resolutions shows that, now more than ever, representation and transparency are priorities of the student body and faculty,” Gallatin senior and SLAM member Hannah Fullerton said. “We have the support of the NYU community, and it’s time the trustees finally get on board. Still, this resolution has always been a starting point, and it is even more pressing that the administration acknowledges our demands now that they know the student body is behind us.”

University administration declined to offer an opinion on the resolution’s passing.

“We don’t opine on everything that happens in the senate,” said Senior Vice President for University Relations and Public Affairs Lynne Brown.

This week, SLAM and another activist organization, NYU Divest, have occupied various locations on campus in pursuit of compliance from university administration on a list of demands. Two representatives from each group will meet with university leadership at 1:00 p.m. this afternoon.

This story will be updated with any developments.