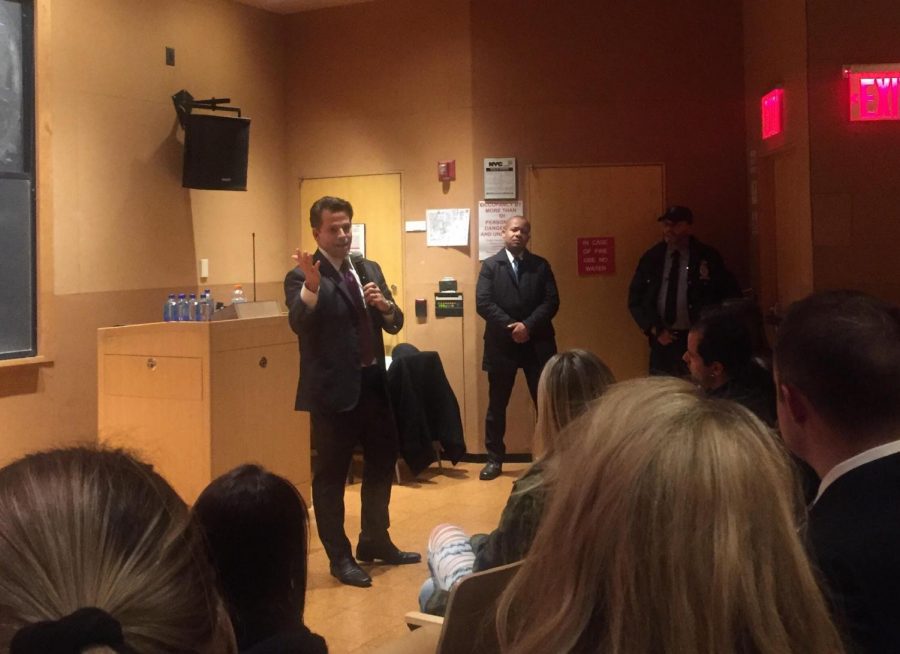 Scaramucci spoke briefly about his 11-day White House tenure before opening the floor to questions. During the hour of back and forth, Scaramucci spoke about labor and wages, admonished the president’s uncouth tone and stated his disagreement with Donald Trump’s use of the term “fake news.”

The former White House Communications director is known by most for his inflammatory departure from the administration after less than two weeks. His firing followed an interview with New Yorker reporter Ryan Lizza, where among other statements, he called former White House Chief of Staff Reince Priebus “a f-cking paranoid schizophrenic.”

At the event Scaramucci said he had believed those statements to have been off the record.

Unlike past events, a ticket was required to attend the Scaramucci talk. The tickets — which were free — sold out in just two days, according to NYUCR Secretary and CAS sophomore Bennett Kauffman. Kauffman went on to say that part of the reasoning for implementing ticket sales was to avoid a repeat of their 2017 Gavin McInnes event, where McInnes was pepper sprayed in the face and 11 people were reportedly arrested.

“The last really big event we did was the Gavin McInnes thing and that didn’t go well,” Kauffman said. “So we kind of learned from that because we didn’t want people who were going to cause an incident to show up to this event so we decided to do tickets so we could be more sure of who we were going to have there so that we could have a more productive event.”

According to both Kauffman and NYUCR Vice President Xavier Malaussena Scaramucci gave the speech free of charge.

Scaramucci started the speech with encouragement for intellectual discourse. The event was without protest, dashing hopes for a frenzied scene held by some attendees.

“I am mainly going to see if there are any protests outside,” Tandon sophomore Norria Tián told WSN before the event. “I want to see some liberal tears out there.”

Midway through his talk, Scaramucci suggested that the proposed deal between Trump and North Korean leader Kim Jong Un on the disarmament of the state’s nuclear arsenal was a sealed deal.

“Who would have believed he [Trump] was cutting a deal with North Korea,” he said. “But that deal is cut.”

At the invitation of Chinese President #XiJinping, #KimJongUn, top leader of the Democratic People’s Republic of Korea, pays an unofficial visit to China from Sunday to Wednesday. https://t.co/9kzte1oxYJ pic.twitter.com/LrVXqCi5fF

He said that recently released photos showing Kim and Chinese President, Xi Jingping would not have been released to the public unless Trump and Kim had agreed on a deal.

“So we will get that deal and it will be the huge shock to most of the liberals,” Scaramucci said.

The Mooch, as he is referred to by the media, distanced himself from the more conservative members of the Trump administration, saying that he leans more libertarian. He said that he supports gay marriage, to which he was met by vocal praise by several in the crowd.

Still, Scaramucci repeated familiar conservative dictums like, “Life is unfair and unsafe and you cannot have your government make it fair or safe,” and “We will never get equal outcomes, only equal opportunities.”

Scaramucci told stories of Trump before and during his campaign, saying he was most interested in the campaign because of Trump’s connection to struggling blue collar families. “There were only two candidates that saw this: Trump and Bernie Sanders,” Scaramucci told the room.

When asked by WSN whether he condonned Trump’s use of the term “fake news” to describe members of the media critical to him, Scaramucci said he thought the president was being counterproductive. Despite his own confrontational past with the press, Scaramucci said it was important to him to uphold an independent press. He said that in his brief tenure as White House Communications director, he attempted to increase transparency between the White House press secretaries and the news correspondents.

“You gotta turn the lights on in the press room and you have got to open yourself up to the free press,” he said. “You might not like what they are saying and you might not agree with them but I don’t agree with declaring a war on the press.”

Some in attendance, such as CAS Sophomore Ajay Iyer, were surprised at how Scaramucci differed from how he is presented in the news media.

“I did expect him to be louder,” he said. “It was a pleasant surprise. I guess I got a certain impression of him from the certain articles I read and what i saw on TV about him but he was definitely very unlike that.”

The event lasted for just over one hour and concluded without incident.