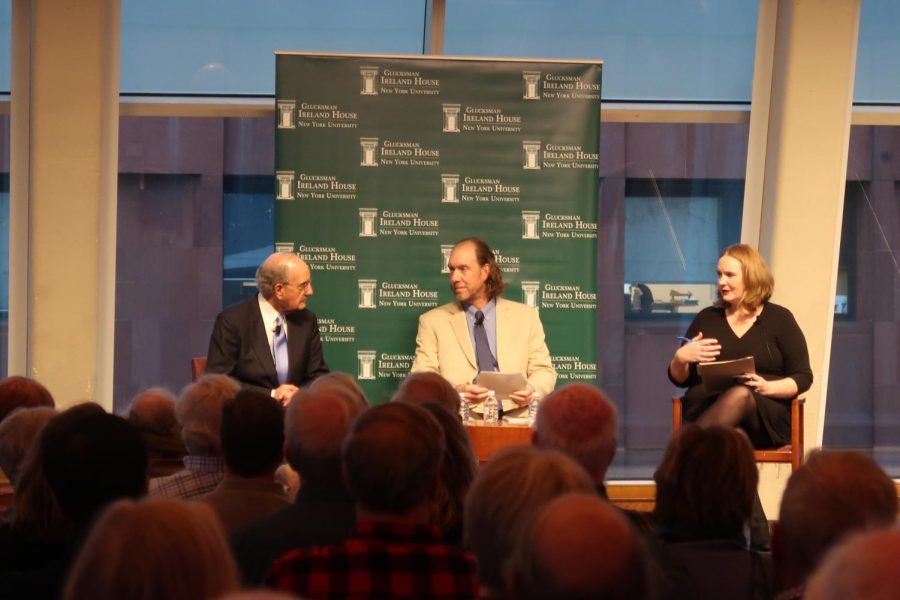 The event focused on Belfast’s Good Friday Agreement, a 1998 deal that ended 30 years of sectarian conflict in Northern Ireland and was later replaced by the St. Andrew’s Agreement in 2006. This month marks the 20th anniversary of the Good Friday Agreement’s signing on April 10, 1998.

About 300 energetic people attended the event. People were keen to hear Mitchell’s insights.

Mitchell held office from 1980 to 1995 and played an important role in forming the Good Friday Agreement. Mitchell spoke at the event, describing the long and stressful process of working with leaders in Ireland beginning in June of 1996 through the signing of the agreement in April 1998.

“There was a lot of opposition to me,” Mitchel said. “When I first went [to Ireland], I had many critics.  “Pandemonium broke out over whether I was fit for becoming chairman.”

Mitchell shared that it was one of the most challenging negotiations of his career, and that the agreement ultimately came together minutes before its deadline. Mitchell had to work between eight political parties to bring many conflicting sides to an agreement. Even though he succeeded in what he set out to do, Mitchell made clear that the agreement had its limitations as well.

“By itself, the agreement did not guarantee peace or political stability or reconciliation,” he said.

Among those in attendance was Tandon School of Engineering Graduate Recruitment and Operations Assistant Director Carrie Bowling, who said she was interested in the event because of her study abroad experience in Northern Ireland and her undergraduate studies in peace and reconciliation. She voiced concern over what effect the British vote to leave the European Union will have on peace in this region.

“A majority of people in Northern Ireland voted to stay in the EU, so I’m concerned about a referendum happening in Northern Ireland as it did in Scotland a few years back, and I think that could be really detrimental and really could ignite sort of a united Ireland thought process again and bring back violence that’s always kind of at the surface waiting to bubble over,” Bowling said.

Marie Moore attended the lecture as a community member with connections to this topic. Moore has dual citizenship in both the United States and Ireland. She has Irish family heritage and is currently taking Irish language classes at NYU. She reflected similar concern to Bowling over Brexit.

“I study in Belfast every year, and I’m very interested in just what’s happening right now,” Moore said. “I hear from my friends over there, and they’re waiting to see what’s gonna happen with Brexit.”

While the lecture emphasized the Good Friday Agreement’s past more than what’s to come in the future, the audience showed an interest in how this historical compromise is relevant moving forward.