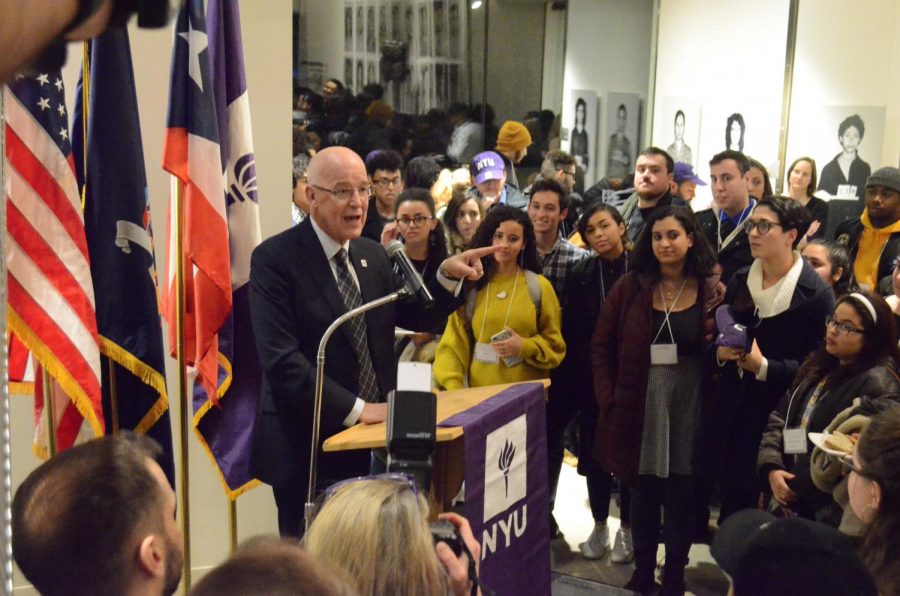 NYU President Hamilton speaking at the welcome reception for the students from Puerto Rico on January 25th, 2018. A number of these students are now asking Hamilton to extend the program.

HMAP Students Initiative published a letter early this morning calling for President Andrew Hamilton to extend the Hurricane Maria Assistance Program for an additional semester. The Initiative posted three versions of the letter, each signed by different groups of people — student groups, faculty and individuals. Out of the 57 visiting students, 27 are part of the Initiative.

In December, NYU admitted 63 Puerto Rican students affected by Hurricane Maria as visiting students for the spring semester and 57 accepted the offer. The program covers tuition, meal plans, housing and healthcare. The program’s goal was to give the visiting students an opportunity to continue their education while Puerto Rico recovered from the hurricane’s damage. Students have asked NYU to extend the program by one semester.

Not every student in HMAP student signed the letter. After sending a survey out to HMAP students and receiving responses from 27 students, the Initiative learned that 26 out of the 27 students wished to extend the program, 21 were willing to sign the letter and 23 would stay if the program was extended.

According to sophomore Carlos Matos, a member of HMAP Students Initiative and one of the authors of the letter, the group has received support from student clubs like NYU Divest, NYU Dream Team and NYU SLAM, as well as NYU faculty and staff members.

“There is a lot support from the community,” Matos said. “Right now, we have [Councilwoman] Carlina Rivera [who] is willing to sign it. Her people are drafting a letter of support. It could be sent by day’s end or Monday.”

The letter emphasizes how if students returned to Puerto Rico after this semester, they’d be returning to nearly identical conditions as when they’d left. For some students, their communities are still without power or running water, and their universities are still not fully-functioning.

While crafting the letter, Matos and his co-writers made a point to express how grateful they were for the opportunities and support NYU has offered them during the past semester.

“Even if we are composing this letter just to ask about the possibility, we are not demanding,” Matos said. “The whole purpose of the program was we are going to be here while Puerto Rico rebuilds, the reality [is that it’s] completely unstable right now.”

Because Puerto Rico is still rebuilding itself, the country is not prepared for the upcoming storm season, which is expected to begin on June 1. Due to the current instability, the HMAP Students Initiative requests a program extension at least until they know the effects of future storms.

The HMAP Students Initiative invites the entire NYU community to read their letter and create a dialogue about their situation.

“We chose the name [HMAP Students Initiative] because we want it to be clear that our efforts are for everyone and anyone who wants to can join us,” Matos said. “We hope more people feel inspired to join us in our efforts.”

WSN will update this story as we know more.